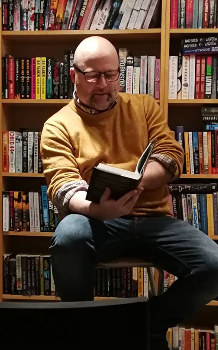 Among other properties Steve has written for Doctor Who, Torchwood, Primeval,Stargate, Warhammer, Slaine, Fireborn, Pathfinder, Arkham Horror, and Rogue Angel.

He won the International Media Association of Tie-In Writers award for his novel, SHADOW OF THE JAGUAR, and the inaugural Lifeboat to the Stars award for TAU CETI (co-authored with International Bestselling novelist Kevin J. Anderson).

Writing as Matt Langley his young adult novel BLACK FLAG was a finalist for the People’s Book Prize 2015.

Over the last few years Steve had been fulfilling the lifelong dream of designing and writing roleplaying games. He's written the monster manual, Carte Monstrorum, for the gothic horror RPG LexOccultum, as well as a soon to be released campaign for Trudvang Chronicles, Lost Heroes, and the world book for a retro dungeon delve game, Ruin Masters. He's currently working on The Seed of the Vanir, an elves companion for Trudvang.

Under house names, Steve has also ghost-written a number of successful street-lit and hiphop novels over the last ten years.

Steve is currently the lead narrative designer on two mobile game projects for Yoozoo Games and BigPoint, one is a huge Viking kingmaker adventure, the other is a spin on the darkest fairy tales out there.

A new take on one of the oldest legends, as we explore the life of King Arthur's knights and a quest for the Unholy Grail.

A comic fantasy romp through some pretty murky depths.

Lovecraftian horror set in the heart of Arkham. Murder and the macabre on a film set as a legendary director taps into the occult world of the old gods to make his materpiece.

Stories of loss and punishment, but even at his darkest Savile has a flair for finding beauty in the macabre, using usually-subtle horror to deliver a succession of poignant insights into love and humanity….striking and moving…